George Johnson is a retired member of the US Navy. He is a decorated World War II, Korea, and Vietnam War veteran. While George was deployed during WWII, his then-girlfriend sent him a “Dear John” letter, which broke his heart. He only found peace because of his four-legged best friends.

The shelter’s director, Maria Dales, talked to George and told him that they did not have one. However, she said that she would watch out for one. Thankfully, a few days later, Maria found a white German shepherd in Arizona. He was a senior dog named Sam and was already scheduled to be euthanized.

Maria said that Sam’s previous owner, a Navy officer, was deployed, so the pup had nowhere to go. Given Sam’s background, George could immediately tell that they were meant to be. So, a rescue volunteer drove from California to Arizona and picked Sam up for George. When they first met, Sam sniffed George a little and quickly gave his new dad his approval.

According to George, since he met Sam, the pup has made a significant impact on his life. Because of him, George has someone to love, to talk to, and someone to look after. The best part of it, as George said, is that Sam would never send him a “Dear John” letter. Sam stays no more than three feet away from George, so the fur dad knows that his pup is looking out for him, too.

George had received many medals, ribbons, and commendations as a Navy officer. However, even with all these awards put together, Sam still fills his heart more. George said that he is honored to look after and be Sam’s companion. George also noted that in dog years, he, who is 93, and Sam, who is 13, are about the same age. 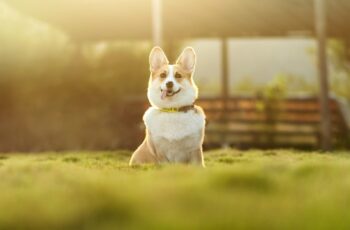