Who is that walking that dog? If you live on Laburnum Avenue in Roanoke, VA,  you might think you’re witnessing a replay of Generation X movies.

Kevin and Caitlin Schulz of Roanoke, VA, sure know how to make the best out of the coronavirus quarantine.  The father-daughter duo decided to dress in costumes while walking their 2 year old mixed breed dog, Coby.

For 53 straight days Kevin and Caitlyn walked their dog through their neighborhood dressed up as anything from a bag of Doritos to Batman. The pandemic left homebound families like the Schulzes with lots of time on their hands and they sure knew how to find creativity during such a time.

Kevin was out of work for nearly two months, while his retail management job was put on hold during the pandemic.  He was looking for something to do rather than watching Netflix all day. The idea came to him and he thought it would be funny to walk the dog in costume.

He already had a costume from a few Halloweens ago and he was putting his idea into motion. Much to his surprise, his 15-year-old daughter agreed to go out in public in costume with him. It was nothing shy of a miracle! The coronavirus costume caper began.

Kevin’s wife got involved by taking pictures of the duo each day before their walks and she posted their adventure on an Instagram site: costumedogwalkers.

Kevin and his daughter dressed as characters from “Braveheart,” “Indiana Jones and the Temple of Doom,” “The Karate Kid,”  Scooby-Doo and Shaggy, Obi Wan Kenobi and Rey from the “Star Wars” movies, Buddy and Santa Claus from “Elf” and even Flo from the Progressive Insurance commercials and Jake from State Farm.

The Schulz duo really wasn’t prepared with an array of costumes for the daily dog walks.  Their closets weren’t full of costumes but they had some left over from parties and he had a collection of wigs his mother had saved from costume parties over the years. He borrowed props from friends and some ideas took days of planning. Some of the costumes, such as the characters from “Up” and “Castaway” required drawings on poster boards. They also used several pieces multiple times as days of costume dog walking turned into weeks. There is a vest that gets used a lot.

Kevin’s favorite costume was the one from “Ghostbusters”  where he dresses as the  Stay Puft Marshmallow Man.  He made a head out of chicken wire and papier-mache and he wore an inflatable costume which he already owned.

As for Caitlin’s costumes, his favorite one of hers included a homemade proton pack he built from scrap wood. There was a lot of time on hand.

The daily costume dog walks ended after almost 8 weeks, when Kevin was called back to work.  They have dressed up a couple of times since then and plan to take more walks this summer as time allows.

Kevin views the walks throughout the neighborhood as a labor of love. 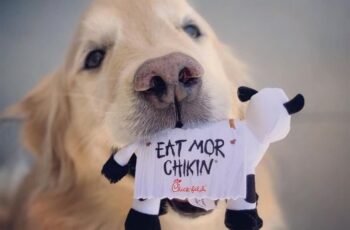 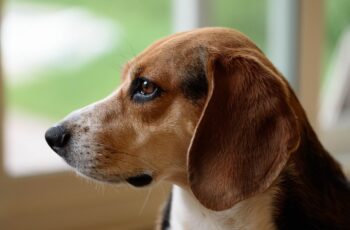